July 29, 2002, instead of clouds, a floating tire (hot air balloon) makes its way across
the Lincoln sky early in the morning. 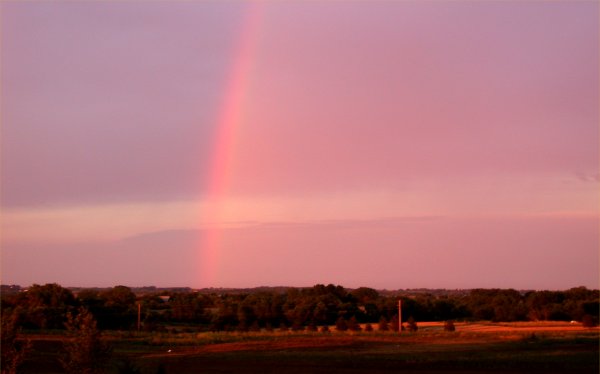 July 28, 2002, a rainbow forms in the east sky on the southeast edge of Lincoln following
a passing shower that produced only 0.03 inches of water.

July 27, 2002, Despite the drought, the morning sunrise finds fog
hovering near the ground in rural southeast Lincoln. 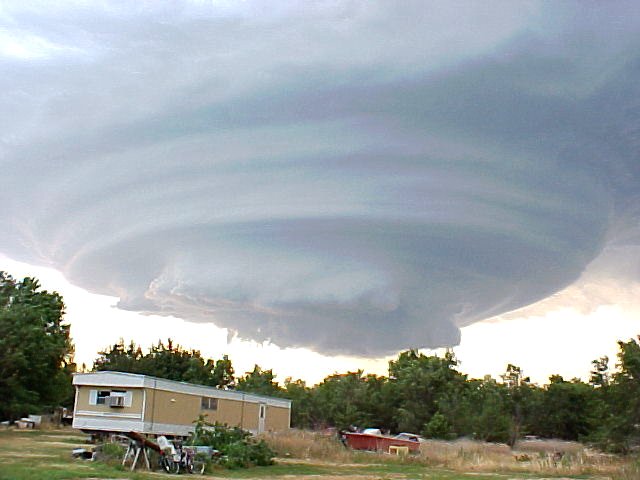 July 22, 2002, a full moon rises over the countryside on the southeast edge of Lincoln.

July 22, 2002, while the full moon rises in the southeast sky, the northwest sky
is painted red by the sun that had just set.  The top of the state capitol building
can be seen in the right center of the photo taken from far southeast Lincoln.

July 21, 2002, clouds move into Lincoln (looking northwest from far southeast Lincoln)
late in the evening providing promise of substantial rain.
Unfortunately, there were only a few sprinkles. 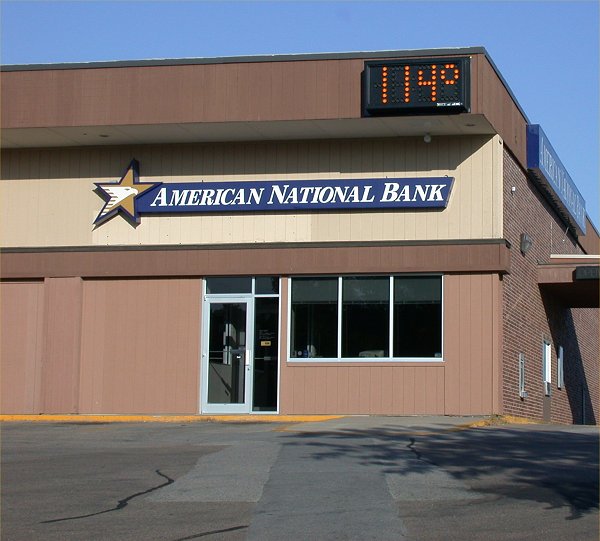 July 21, 2002, 27th and Hwy 2 in Lincoln.  The official temperature, at the airport,
was 104 F, the hottest day of the year.  Why does this bank thermometer read 114 F.
Two reasons, bank thermometers are not always accurate and,
the heat from the surrounding black top parking lot helps to provide extra heating
raising the temperature more than where it is measured at the airport.
The airport measurement is over a grassy surface west of the runways.

July 19, 2002, far southeast Lincoln. Lincoln's first 100 F day since last year and with parched soil we look
more like a desert than a grassland region.  A tent, being held up by a fork lift helps
provide shade for workers with heat Indices reaching 110 F in the area.

July 17, 2002, a single thunderstorm formed just southeast of Lincoln in mid
afternoon.  It produced a brief downpour about 40 miles SE of Lincoln
and knowing its a drought, promptly dissipated as temperatures soared
into the upper 90's F. 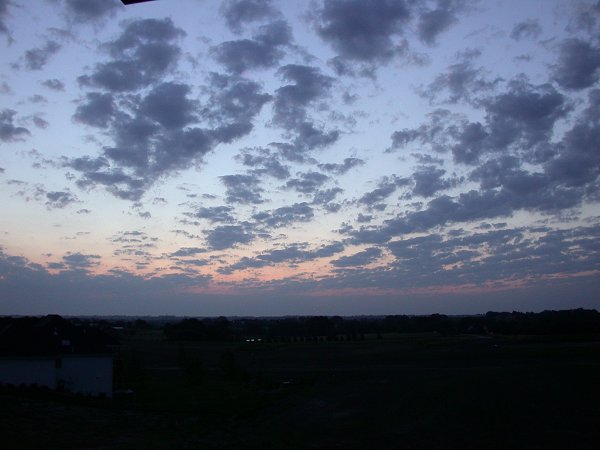 Home of the Nebraska Weather and Climate
Web Site, LW Chase Hall, east campus of
The University of Nebraska-Lincoln. 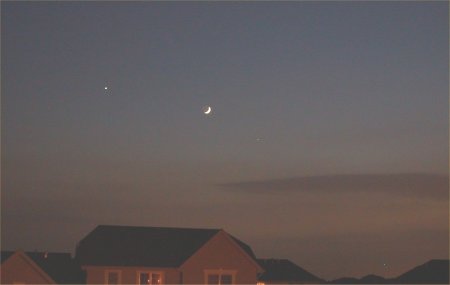 July 12, 2002. About 30 minutes after sunset, 9:30 PM CDST
and a partially illuminated moon and a star to the left of
the moon are visible in the sky over southeast Lincoln.
CLICK HERE to see a larger image (the dark part of the moon
is visible if you look carefully and your monitor is higher resolution). 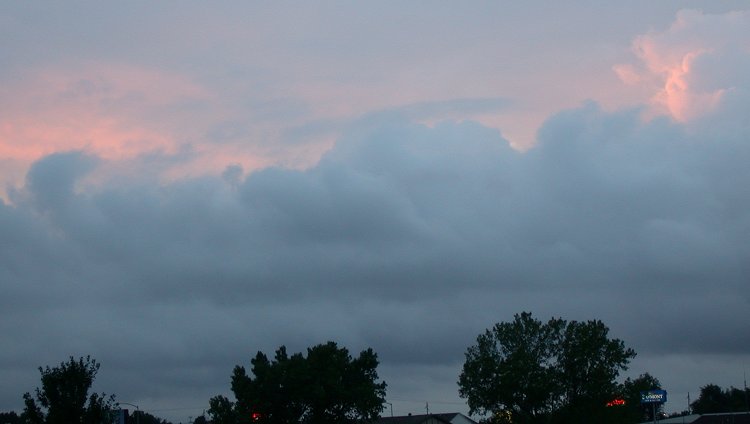 Photographed on July 11, 2002,  just after sunset in far north Lincoln.
The sun, although below the horizon is still shining on the tops of some of the clouds.
The clouds were coming in from the north heralding the arrival of some cool Canadian air.

Photographed on July 9, 2002 in southeast Lincoln.
The sun sets behind a line of storms moving southeast across Nebraska.
Unfortunately, by the time they reached Lincoln on the morning of July 10,
the precipitation amounts were negligible.

Photographed on July 7, 2002 just west of Lincoln.
The drought in Southeast Nebraska is readily evident in the brown grass
in the media and along the shoulders of the Interstate. 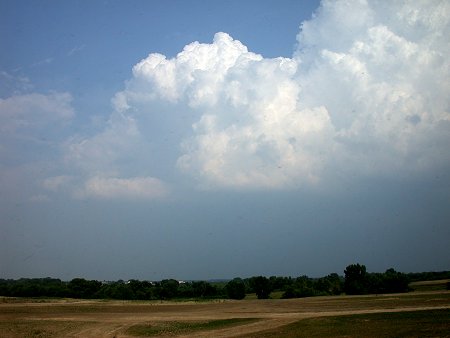 Photographed on July 6, 2002 in southeast Lincoln.
Cumulus clouds entered Lincoln from the south and brought needed rain to the city.
This was the first measurable rain in 18 days, following the
driest June in recorded history for Lincoln (116 years of data). 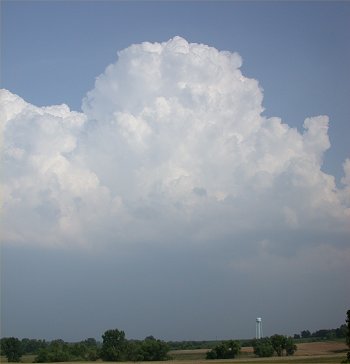 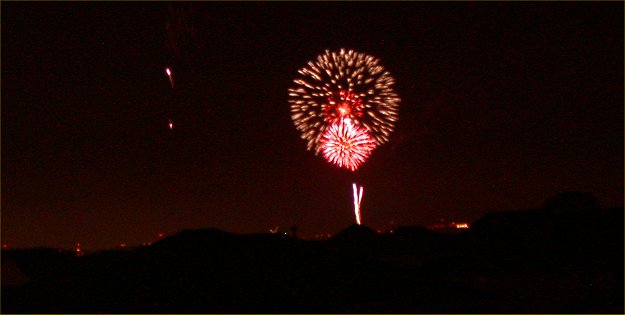 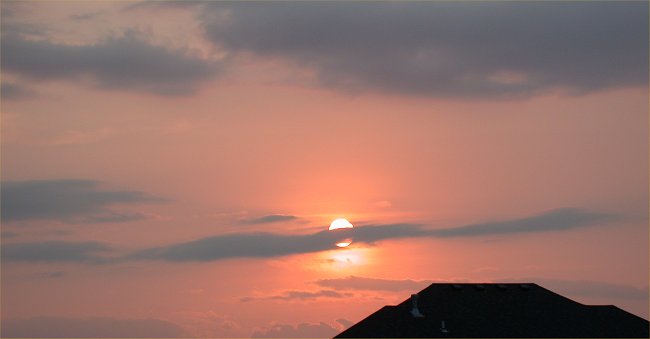 July 2, 2002.  An early summer sunset in southeast Lincoln.
Although there has been no measurable rain for weeks, humid air from
Texas (where it has rained 18 inches since the weekend near San Antonio)
has reached into our area increasing cloud cover and causing this red sunset.

July 1, 2002.  A few dark clouds roll across the southeast edge of Lincoln.

July 1, 2002.  A few dark clouds roll across the southeast edge of Lincoln.